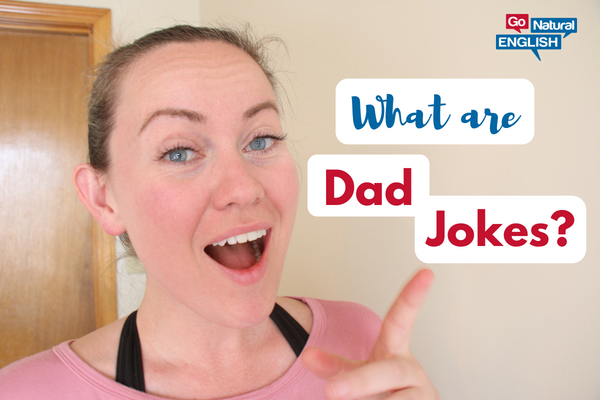 We’ve had a rather busy few days here at Go Natural English, and now seems like the perfect time to start our week off with some much-needed humor!

Have you ever heard the term “dad jokes”? “Dad jokes” are fun for all ages because the subject matter is always appropriate. (This is what gives them their charm!) Cheesy, silly, and sometimes embarrassing, “dad jokes” are exactly what they say: jokes made by dads!

In the United States, fathers are often known for their lame jokes, most of which only they themselves find funny.  Pick almost any American sitcom with a dad as a main character, and you are sure to find a plethora of “dad joke” material! It’s the kind of humor most associated with middle-aged men, especially fathers. They often use puns, or play-on-words, which is when a word has more than one meaning.

Humor, and specifically dad jokes, can help you unlock another layer of the English language, believe it or not! Dad jokes — even though they’re usually unoriginal and not very funny — play with language. Learning a new language through humor is a fun and easy way to learn, without feeling stressed or overwhelmed.

Jokes usually have two main components: the setup (the body of the joke) and the punchline (the surprise at the end). Check out Gabby’s favorite dad jokes below, and try using them in your own conversations, and in your own way!

The punchline is a play-on-words, because apparent (which means clear or obvious) sounds just like “a parent,” but they mean different things!

Setup: “What did the candle say to the other candle?”

Ha ha ha!  To “go out” usually means to go out on a date, but in this joke, when a candle flame “goes out,” it means that the candle’s flame has been extinguished and the fire is out. This is an example of a double entendre, or a joke with a double meaning.

Punchline: “No? Well, maybe because they’re still looking for a gig!”

If you’re a techie, you probably loved this one! A gig is a live performance by a musician or group. In this case, it’s funny because a gig can also stand for a gigabyte.

Setup: “What do you call a singing computer?”

This one will surely be turning tables on your joke skills!  Rumor has it that this joke will always be a hit! (Get it?!)

Setup: “Did you hear about the kidnapping at school?!”

Punchline: “It’s OK, don’t worry, the teacher woke him up!”

This joke is particularly awesome for English learners because we get to see how stressing words can change compound noun. Nerdy dad jokes + nerdy grammar = our favorite kind of equation!  A kidnapping is when a child is taken illegally and against their will (definitely not funny!). A kid napping is a kid who is taking a nap. See the difference, and how it works in this joke?

Let us know what you think about these jokes, and if you have any “dad jokes” of your own you’d like to share with us! And click on our video below to hear these jokes in action and laugh along!