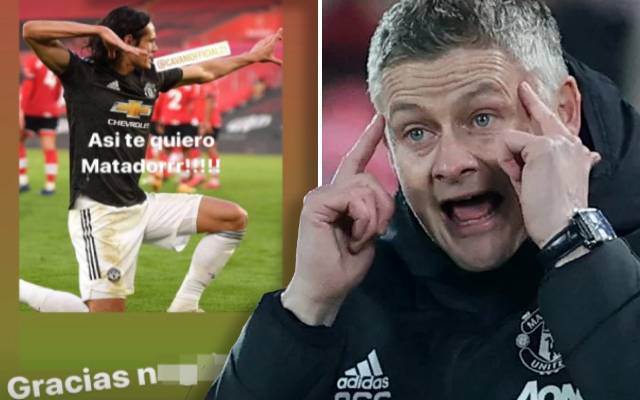 Manchester United manager Ole Gunnar Solskjaer may have left himself open to claims of insensitivity with his jokes about Edinson Cavani, days after the striker was accused of being ‘racist’.

Solskjaer was accompanied by another summer signing in Donny van de Beek in United’s pre-match conference ahead of tomorrow’s tie against Paris Saint-Germain.

Cavani landed himself in hot water when he replied to a friend congratulating his match-winning contribution vs Southampton with ‘Gracias Negrito’ – which translates to the term ‘thanks, little black’.

The Times report that Cavani is now facing a minimum three-match ban if he’s found guilty of a racism-related charge for the incident.

A question from Christophe Remis called for both to discuss Cavani’s personal attributes, with the Uruguayan branded a ‘top professional’ by his boss.

Then came the comments – which were by no means made in an ill manner – which could be considered strange given the storm Cavani’s facing, as Solskjaer joked about the striker’s level of English.

After arriving as a free transfer signing from Paris Saint-Germain this summer, Cavani speaks little of the Queen’s tongue, with Solskjaer joking that he only knows the words ‘tomorrow’ and ‘off’.

Ole Gunnar Solskjaer and Donny van de Beek having a little laugh and joke about Edinson Cavani during the pre-match press conference… pic.twitter.com/AUrxUA5rOs

“He’s already learnt two English words ‘tomorrow off’, when we win a game he wants a day off (Van de Beek laughs), so he knows that one.”

It certainly presents a kind of mind emotions outlook when Cavani’s lack of English (understandable) is joked about days after that very same flaw led to him being branded as a ‘racist’ by some.

Solskjaer did discuss that incident at the very start of his press conference, insisting that no ‘malicious intent’ was meant by Cavani and that United will ‘support him’.

This is by no means a bad reflection on Solskjaer, just an unfortunate time for the Norwegian to drop one of his classic light-hearted one-liners.