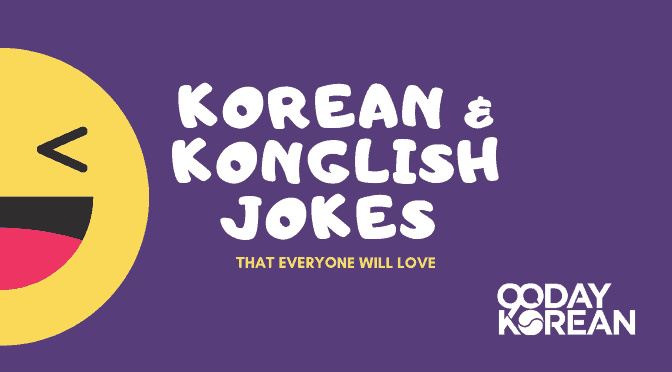 If you like Korean jokes, then you’re going to love what you’re about to read. There’s more to Korean culture than just the traditional things. There’s also a lot of humor!

We’ve got the best of Korean jokes, Konglish jokes, and Korean Dad Jokes (아재개그 / ajaegaegeu) all in one spot.

To keep the laughs rolling anywhere you go, we also created a free PDF that you can download and take with you.

Most of the jokes here are a mix of Korean and English. This is what the word ‘Konglish’ means. They may be a play on words in either of the languages.

Try to figure out the meaning on your own. If you can’t, not to worry! We wrote down the explanation below each one.

Do I need to know Korean?

You don’t need to know Korean. We’ve written the jokes in both English and Hangeul. If you know some basic Korean, it will be easier for you to understand the jokes. It can also be fun to mix these into your regular routine for learning Korean or in conversations with locals if you’re in Korea.

Since the jokes are a mix of Korean and English, it helps if you know at least some basic Korean. If you can’t read Korean yet, here’s how to learn in about 1 hour.

What Are Korean Dad Jokes?

Below we’ve got a list of amazing Korean jokes, organized by categories.

Can you explain the meanings of these jokes? If not, we’ve got you covered! Each joke has an explanation below it.

Once you understand them, try them on your Korean friends or with Korean students in the classroom. You might get some mixed results with some, but overall you’re sure to get a lot of laughs!

Are you a foodie? Then you are you going to love these jokes about food. Here is some hilarious humor related to food such as meals, fruits, and vegetables and drinks.

Q: What is the biggest bean in the world?

Explanation: The word 콩 (kong) in Korean means “bean“, and 킹 (king) sounds like “king“. Put them together, and you’ve got the big bean boss, King Kong!

Q: What does a vampire drink in the morning?

Explanation: We all know that vampires usually drink blood, right? The word for “blood” in Korean is 피 (pi), and 코 (ko) means “nose“. Put them together, and you’ve got 커피 (kopi, which sounds like “coffee”).

Q: Why couldn’t the ice cream cones cross the road?

Explanation: If you’re going to eat ice cream, it’s got to be cold. In Korean, cold is 차갑다 (chagapda). Now, what passes through roads are cars, right? The Korean word for cars is 차 (cha) and 와서 (waseo) means “because something came“. This makes 차가와서 (chagawaseo) means the car came. So, ice cream cones cannot cross the road because cars came.

Q: What did the cookie say to his friends when he was ready to go?

Explanation: If  it’s time to leave, you say “let’s go” to friends. You can say the phrase “let’s go” as 가자 (gaja) in Korean. This phrase sounds like the word 과자 (gwaja) which means snack in Korean. And cookies are considered snacks. So when a bossy cookie is ready to go, he’ll say to his other cookie friends 과자 (gwaja)!

Q: What do you call a coffee that can’t move?

Explanation: In Korean, you say 못 가 (mot ga) when you can’t go to a certain place or event. This phrase 못 가 (mot ga) sounds like 모카 (moka), your favorite drink at Starbucks!

Q: What is a robot’s favorite food?

Explanation: What’s that “beep, beep” noise? Sounds like a robot, doesn’t it? And the syllables 비빔 (bibim) in 비빔밥 (bibimbap) sound like “beep, beep” when pronounced quickly. 밥 (bap), on the other hand, means rice. So, the favorite food of those hungry robots is 비빔밥 (bibimbap).

Q: What did the boneless fish say?

Q: What do you say if you don’t have enough money at the pojang macha?

Explanation: 포장 마차 (pojang macha) means snack cart. And, when you are in a 포장 마차 (pojang macha), you’ll normally buy something. But if you don’t have enough money to buy what you want, you’ll say 오댕 (odaeng) which sounds like “Oh, dang!” in English.

Q: Where does a lettuce go for worship?

Explanation: The word for “lettuce” in Korean is 상추 (sangchu). A sanctuary is where you go to worship, and the first part sounds like 상추 (sangchu).

Explanation: The number 5 in Korean is 오 (o). And “year” is expressed as 년 (nyeon). So, a 5 year old onion is called 오년 (onyeon). It literally means 5 years and it sounds like the word onion. Whatever you do, don’t eat that 오년 (onyeon)!

Q: What should do you do if a watermelon sues you?

Explanation: The word 수박 (subak) means watermelon in Korean. And, if you listen to it carefully, 수박 (subak) sounds like sue back in English. So if a watermelon sues, make sure you lawyer up and 수박 (sue back)!

Q: Why did the pear go to the hospital?

Explanation: The word 배 (bae) can mean two things in Korean. It can mean pear and stomach. And, 아파 (apa) from the word 아프다 (apeuda) means pain or ache. So, if a pear goes to the hospital it is because of stomach ache which can be expressed as 배아파서 (baeapaseo).

Q: What is the most apologetic fruit?

Explanation: 사과 (sagwa) means two things in Korean. It can mean apple and apology.  So sometimes people who want to apologize to someone, they give an apple to show they’re sorry.

The following are jokes related to people such as jobs or professions.

Q: What do you call a cute guy with no ears?

Explanation: The word 귀 (gwi) means ears and the word 없다 (eopda) means none or not existing. So, the word 귀없다 (gwieopda) means no ears. When it’s pronounced quickly, it sounds like the Korean word for cute, which is 귀엽다 (gwiyeopda).

Q: What do you call a news reporter who interviews the sun?

Explanation:  해 (hae) means sun in Korean while 리포터 (ripoteo) is how the English word reporter is spelled in Korean. So a reporter who interviews the sun is a 해리포터 (haeripoteo), which sounds like Harry Potter.

Q: Where does a Korean grandfather look for love?

Explanation: The word 할머니 (halmeoni) means grandmother. If you add an e at the beginning, you get e-할머니 (e-halmeoni), which sounds like the online dating website eharmony.

Traveling is always fun, but it’s more fun if we have a handful of jokes in our pockets! Here are jokes related to places and countries.

Q: What do Koreans smoke at the horse racetrack?

Q: Where do Australians keep their money?

Explanation: All of us have put money in our pockets, right? In Korean, the word for pocket is 호주머 (hojumeoni).  But why Australians? It’s because the word 호주 (hoju) in 호주머니 (hojumeoni) means Australia.

Q: What country has the biggest noses in the world?

Explanation: In Korean, 멕시코 (meksiko) is the way you spell Mexico. The end of the word, 코 (ko), means nose. And 멕시 (meksi) sounds like maxi, or big. So, if you put them together, it sounds like maxi nose.

Q: Which country has 4 arms?

Explanation: In the native Korean number system, number 4 is read as 넷 (net). But the ㅅ in 넷 (net) is usually omitted when combined with nouns. Meanwhile, arms is expressed as 팔 (pal). So, 네팔 (nepal) which is a country name literally means 4 arms in Korea.

Q: What do you call scary water?

Explanation: If the idea of monsters indeed exists, we’ll be all scared of them. They’re scary! For this joke,  the word 괴물 (goemul) means monster. And the word 물 (mul) means water. So, what’s scary water? It’s 괴물 (goemul)!

Explanation: 십 (sip) is number 10 in Korean and is pronounced as ship. And in English, a ship is the means of transportation when traveling by water.

Here are jokes related to things like your personal belongings.

Q: Who is the hairiest robot?

Q: What do you call a broken motorcycle?

Q: How much does a Korean blanket cost?

Explanation: By definition, 이불 (ibul) means blanket but if you take out each of the syllables individually, we’ll have 이 (i) and 불 (bul). 이 (i) means 2 and 불 (bul) means dollar, but an informal word. So a Korean blanket costs 이불 (ibul) or $2

Q: What noise does a toaster make?

Explanation: The word 빵 (ppang) sounds like the bang when shooting something. And a toaster, as we all know, is used for toasting bread which is 빵 (ppang) in Korean. So the sound that a toaster make is 빵 (ppang)!

Q: What do you call a large piece of tissue?

Explanation: 휴지 (hyuji) means tissue and it sounds like huge in English.

Below are jokes related to animals, insects, and all of our nature friends out there.

Q: Why did the mosquito go to the hospital?

Explanation: The word 모기 (mogi) in 모기아파서 (mogiapaseo) means mosquito. This word sounds like 머리 (meori) which means head. And, 아파서 (apaseo) from the word 아프다 (apeuda) means pain or ache. So, the mosquito went to the hospital because of a headache.

Q: What do you call a pig who plays the guitar?

Q: What language do sheep speak?

Explanation: The word 양말 means socks. But the word 양 means sheep and 말 means words or speech making it sheep language if we take the meaning syllable per syllable. So the language of a sheep is 양말.

Q: Why don’t you care about a small cow?

Explanation: 소 (so) means cow and 소소 (so so) is from the word 소소하다 (sosohada) which means small or minor. This joke means that a person doesn’t care about a small cow because it’s small and that makes it not important.

Here with go with jokes related to other things, such as nature.

Q: What do you bring to a party in the rain?

Explanation: We say 비 (bi) for rain and 와요 (wayo) for come. And during parties, there’s a saying BYOB which stands for bring your own bottle. So when it rains you bring 비 와요. 비. (bi wayo bi).

Q: When is the best time to catch a snowman?

Explanation: The word 눈 (nun) has 2 meanings, snow and afternoon. With the double meaning, that’s why the best time to catch a snowman is in the afternoon!

What is your favorite Korean joke? Let us know in the comments below and we’ll add them to the list!