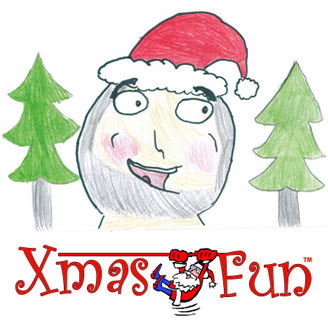 Back To XmasFun Home Page

What do you call people who are afraid of Santa Claus?
Claustrophobic.

Why does Santa have 3 gardens?
So he can ho-ho-ho.

Why was Santa’s little helper depressed?
Because he had low elf esteem.

What do you call an elf who sings?
A Wrapper!

What do you get when you cross a snowman with a vampire?
Frostbite.

What do snowmen eat for breakfast?
Ice Crispies.

A wonderful Christmas song told me to Deck The Halls….so I did. Mr. and Mrs Hall were not very happy.

Don’t you hate that awkward moment when Santa Claus has the same wrapping paper as your parents!

How much did Santa pay for his sleigh?

Nothing, it was on the house!

What do you get when you cross an archer with a gift-wrapper?
Ribbon hood.

Never catch snowflakes on your tongue until until all the birds have gone south for the winter!

What do you get when you combine a Christmas tree with an iPad?

What did Adam say on the day before Christmas?

There was once a great czar in Russia named Rudolph the Red. He stood looking out the windows of is palace one day while his wife, the Czarina Katerina, sat nearby knitting. He turned to her and said, «Look my dear, it has begun to rain!» Without even looking up from her knitting she replied, «It’s too cold to rain. It must be sleeting.» The Czar shook his head and said, «I am the Czar of all the Russias, and Rudolph the Red knows rain, dear!»

T’was the night before Christmas and all through the house, Not a creature was stirring, not even a mouse. The stockings were hung by the chimney with care. They’d been worn all week and needed the air.

Q. What do you get if you cross mistletoe and a duck?
A. A Christmas Quacker.

Q. What do call Santa when he stops moving?
A. Santa Pause!

Q. Where does a snowman keep his money?
A. In a snow bank.

Q. Why do mummies like Christmas so much?
A. Because of all the wrapping!
Contributed by: Skylablue Gorman

You do all the work and the fat guy with the suit gets all the credit!

Did you know that according to the song, «Rudolph the Red-Nosed Reindeer», Santa has twelve reindeer? Sure, in the introduction it goes «There’s Dasher and Dancer and Prancer and Vixen, Comet and Cupid and Donner and Blitzen…» That makes eight reindeer. Then there’s Rudolph, of course, so that makes nine. Then there’s Olive. You know, «Olive the other reindeer used to laugh…» That makes ten. The eleventh is Howe. You know, «Then Howe the reindeer loved him…» Eleven reindeer. Oh, and number 12? That’s Andy! «Andy shouted out with glee.» The proof is in the song!
Originally Contributed by: unknown…We were reminded about Andy by Paul Grupe!

Q: What do you call Frosty the Snowman in May?
A: A puddle!

Q: Where do reindeer go to dance?
A: Christmas balls!

Q: If Frosty the Snowman married a vampire,what would they name their child?
A: Frostbite!!
Contributed by: Cassie Hauser

Q: What did Mary Poppins want from Santa?
A: Supercalifragilistic­expialisnowshoes!
Contributed by: Jemima

Q: Who hides in the bakery at Christmas?
A: A mince spy!
Contributed by: Tara Wade

Q: What Christmas song is hidden in the alphabet:

A: Noel (No «L»)
Contributed by: Abby and Alessandra

An honest politician, a kind lawyer and Santa Claus were talking when they all noticed a $5 bill on the floor. Who picked it up?

Santa of course, the other two don’t exist!

This Christmas, in lieu of gifts, I’ve decided to give everyone my opinion!

How does Santa sing the alphabet?

Contributed by Amber B.

Knock Knock,
Who’s there?
Hanna!
Hanna who?
Hanna partridge in a pear tree!

Q: Where does Santa sleep when he’s traveling?

Q: What is the name of Santa’s meanest reindeer?

A: Olive! … «Olive the other reindeer used to laugh and call him names!»

Oh, c’mon baby, let’s you and I do Weeweechu. I love you and it’s the perfect time,» Pedro begged.

«But I wanna just hold your hand and watch the moon.» replied Rosita.

Rosita looked at Pedro and said, «OK, one time, we’ll do Weeweechu.»

Pedro grabbed his guitar and they both sang…..

In Memory Of Jess Gonzalez

Do you have any Christmas jokes you would like to share? Send them to us and we’ll include them here. Don’t forget to include your name and we’ll give you credit!