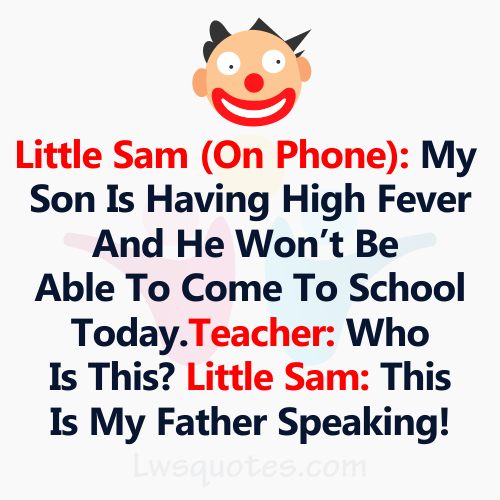 funny jokes in english for students

Girl: You would be a good dancer except for two things.
Boy: What are the two things?
Girl: Your feet.

A teenage girl had been talking on the phone for about half an hour, and then she hung up.
“Wow!,” said her father, “That was short. You usually talk for two hours. What happened?”
“Wrong number,” replied the girl.

Two boys were arguing when the teacher entered the room.
The teacher says, “Why are you arguing?”
One boy answers, “We found a ten dollor bill and decided to give it to whoever tells the biggest lie.”
“You should be ashamed of yourselves,” said the teacher, “When I was your age I didn’t even know what a lie was.”
The boys gave the ten dollars to the teacher.

Two cows are standing in a field.
One says to the other “Are you worried about Mad Cow Disease?”
The other one says “No, It doesn’t worry me, I’m a horse!”

Teacher asked, If I saw a man beating a dog and stopped him then what virtue would I be showing?
The student replied: BROTHERLY LOVE

Teacher to student: “Make a sentence using the word “I”
Student: “I is..”
Teacher: “No that is not correct, you should say I am”
Student: “Ok. I am the ninth letter in the Alphabet”!

Mother: “Why did you get such a low mark on that test?”
Junior: “Because of absence.”
Mother: “You mean you were absent on the day of the test?”
Junior: “No, but the kid who sits next to me was.”

Teacher: How old is your dad.
Student: He is as old as I am.
Teacher: How is it possible?
Student: Because he became a dad only after I was born.

Teacher: “Why are you late, Joseph?”
Joseph: “Because of a sign down the road.”
Teacher: “What does a sign have to do with you being late?”
Joseph: “The sign said, ‘School Ahead, Go Slow!’”

A teacher asked a student to write 55.
Student asked: How?
Teacher: Write 5 and beside it another 5!
The student wrote 5 and stopped.
teacher: What are you waiting for?
student: I don’t know which side to write the other 5!????????

Teacher: Why are you late?
Student: There was a man who lost a hundred dollar bill.
Teacher: That’s nice. Were you helping him look for it?
Student: No. I was standing on it.????????

Little Sam (on phone): My son is having high fever and he won’t be able to come to school today.
Teacher: Who is this?
Little Sam: This is my father speaking!

Customer in a restaurant: I would like to have a plate of rice and a piece of fried chicken and a cup of coffee
Waitress : Is it enough Sir?
Customer : What? Do you think I can’t buy more?

Patient: Doctor, I think that I’ve been bitten by a vampire.
Doctor: Drink this glass of water.
Patient: Will it make me better?
Doctor: No, I but I’ll be able to see if your neck leaks.

Teacher asked the students to tell the most common word used by students in a classroom.
Suddenly a student got up and said “Can’t Sir”!
Brilliant! You are right, the teacher said!????

Teacher: Which one is closer, Sun or Africa?
Johnny: Sun
Teacher: Why?
Johnny: We can see the sun all the time, but can’t see Africa.

Teacher said the students to convert the sentence “I killed a person” into future tense.
Suddenly Johnny stands up and said, Sir the future tense is “u will go to jail”!

One day teacher asked Sam that did his father help him with his homework.
Sam simply said that “No, he did it all by himself”!

Teacher announced that “students, we will have only half a day of school in this morning.
All the students said “Yeahh”
Then the teacher said “We will have the other half this afternoon”!????

Teacher: Why are you late?
Student: Because of the sign on the road.
Teacher: What type of sign?
Student: The sign that says, “School Ahead, Go Slow.”!

funny jokes in english for school

A black Jewish boy runs home from school one day and asks his father, “Daddy, am I more Jewish or more black?”
The dad replies, “Why do you want to know, son?” “Because a kid at school is selling a bike for $50 and
I want to know if I should talk him down to $40 or just steal it!”

My daughter received this e-mail from a prospective student prior to the start of the semester: “Dear Professor,
I won’t be able to come to any of your classes
or meet for any of the tests. Is this a problem?”

A teacher asked her students to use the word “beans” in a sentence.
“My father grows beans,” said one girl. “My mother cooks beans,” said a boy.
A third student spoke up, “We are all human beans.”

An old teacher asked her student, “If I say, ‘I am beautiful,’ which tense is that?”
The student replied, “It is obviously past.” 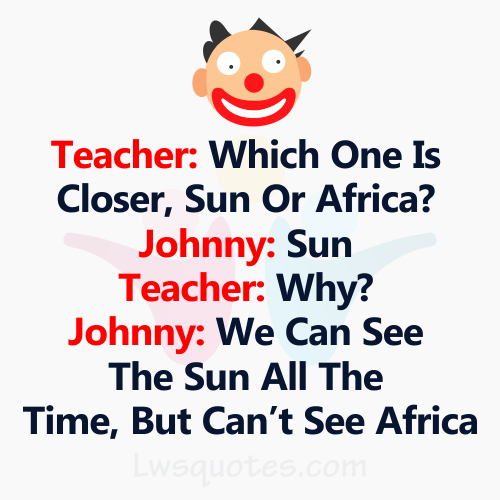 Funny Jokes In English For Students 2020

Teacher: What’s the difference between a cat and a comma?
Student: One has claws at the end of its paws. The other is a pause at the end of a clause.

Teacher: Why do geographers find mountains so funny?
Student: Because they’re hill areas.

Teacher: What pencil did Shakespeare write with?
Student: 2B.

Teacher: Where was the Declaration of Independence signed?
Student: At the bottom.

We had an exam in class today and afterwards the teacher said to me, “I hope I didn’t see you looking at John’s answers.”
I said, “I hope so too.”

My teacher forgot to take the register today.
She’s absent-minded.

My math teacher asked me why I was doing my sums on the floor.
I said, “You told us to do them without using tables.”

My teacher said today, “I want you to give me the longest sentence you can think of.”
I said, “Life imprisonment.”

My teacher pointed his ruler at me when I was talking in class today and told me there was an idiot at the end of it.
I asked him which end.????

A new teacher, trying to make use of her psychology courses, started her class by saying, “Everyone who thinks they’re stupid, stand up.”
After a few seconds, little Johnny stood up.
The teacher said, “Do you think you’re stupid, Johnny?”
“No Ma’am, “he said, “but I hate to see you standing up there all by yourself.”????